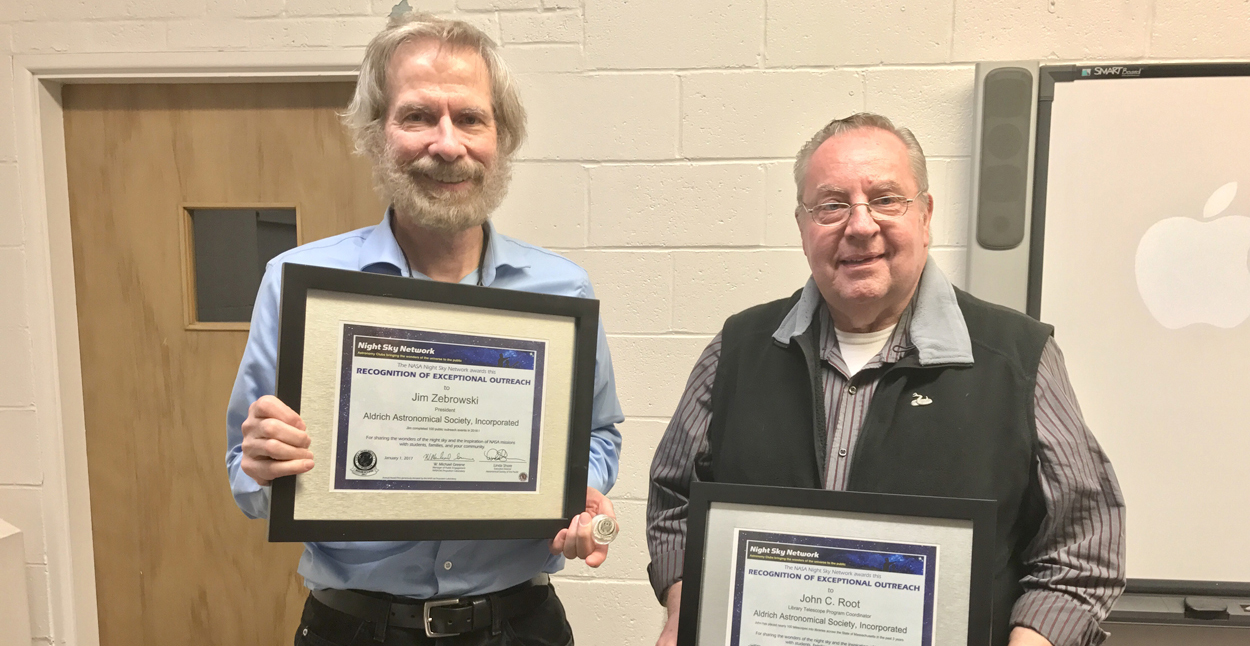 AAS received the award for both Massachusetts Wing and North East Region at our conference banquet on 9 Apr.

…Again, thank you for all you have done for Civil Air Patrol.

Among 41 entries, one astronomical society’s commitment to excellence in astronomy outreach brings accolades.

WAUKESHA, WI — Aldrich Astronomical Society of Worcester, Massachusetts, is the winner of Astronomy magazine’s 2007 “Out-of-this-world” outreach award. Astronomy chose Aldrich from among 41 entries received from all over the United States and from as far away as Romania.

Astronomy is proud to support the community with this unique award, and the numerous, energetic activities of the Aldrich Astronomical Society make it a highly deserving winner for 2007. Congratulations to all the society members for all they do, and for all they plan to do,” says Astronomy Editor David J. Eicher. Astronomy editors selected Aldrich based on the group’s diverse offering of astronomy outreach activities and a detailed plan for spending the $2,500 award.

What makes Aldrich’s astronomy outreach program sizzle is the society’s clear vision of its role in the community. Since 1932, its mission has been “to educate people of all ages on the wonders of the night sky,” says Aldrich Astronomical Society President Jim Zebrowski. And the group takes its mission seriously.
Not only does Aldrich sponsor public observing sessions, planetarium shows, and mirror-grinding activities, but society members also take its educational program on the road. Members give presentations to community groups like the Boy and Girl Scouts of America. They visit libraries, local K-12 schools, colleges, and senior centers. They also offer more than 30 different PowerPoint and slide-show presentations on a variety of astronomy topics to the public.

But that’s not all. Aldrich offers astronomy courses through local colleges. The society’s workshops show teachers how to construct engaging lesson plans and demonstrate astronomical concepts to their students. The group is also instrumental in bringing Moon rocks, meteorites, and space suits to classrooms and has helped create a Mars habitat. Four of Aldrich’s members are NASA/JPL-trained Solar System Ambassadors.

A stellar offering of programs, passionate volunteers, a commitment to mentoring, and a clear plan for the future help Aldrich Astronomical Society successfully carry out its mission. When asked to give advice to societies striving for excellence in astronomy outreach, Zebrowski responds, “If any club is to achieve success, it must have a vibrant and growing membership that feels the same passion you felt when you joined the society.” And, he adds, Aldrich’s achievements are due in part to its “ability to attract younger members and their families, [people] who really want to learn more about the night sky and share their interests with others.”

Winning Astronomy’s “Out-of-this-world” contest, and its $2,500 prize, will help Aldrich build on its success. Zebrowski says Aldrich will use the funds to purchase equipment and books and develop demonstration toolkits. The group plans on purchasing a 6-inch reflecting telescope; a solar telescope for viewing features on the Sun; four binoculars, two 10×50 and two 8×42; two eyepieces with Moon filters; 75 star and planet locators; and a green laser pointer. Aldrich also plans to procure age-appropriate space and astronomy books and magazines and expand its Adopt a Library program.

The society will use the remaining funds to develop demonstration toolkits educators will use in the classroom. Aldrich’s goal is to create a learning cycle that spans the entire academic year. “More importantly,” Zebrowski says, “we hope this recognition will also encourage other astronomy groups to see the value in working in their communities and to expand their efforts to promote stargazing to the public.”